Dogs that have a fur almost white and cream colored but do not have a black mask and a black nose are known as STRAW. So how did it happen that nowadays we have a cane corso color, which is different than all the others and not accepted by the standard?

Why they aren’t in the standard? Lets meet the facts!

The STRAW Cane Corso Was named “CANE DE PAGLIAIO” when its function was to watch at the straw stack (in Italian “pagliaio”) and to everything there was inside such as wheat, fodder, hay and forage, so the “CANE DA PAGLIAIO” means watch dog.

The straw stack was a functional unit of the farm in that, during winter, it worked as the shelter of all animals, cats and dogs included.

The preffered color for this dog was straw-like, because old people thought that the character of a straw colored dog was “flammable” like the straw.

Cereal cultivation is very ancient and it develop according to man’s progress. Straw and haystacks were countryside and they kept precious goods, so that they were attractive to thieves.

It was then necessary to have an aggressive and strong STRAW STACK DOG night and day. Straw was not only the food and bed of the animals but it was also needed by bakers, by snow-wipers and brick makers. Other jobs in which straw was used (and consequently the Cane Corso) was the production of chalk and bricks. Where the dog was injured during fighting , masters used to disinfect their wound with straw ash or with olive oil and straw ash mixture.

DNA results on straw-colored Cane Corso. Even though the dog is “sable/fawn” at the A locus, the “yellow/red” mutation at the E locus knocks out and overrides any other coat color that may be genetically present. Dogs of this “e/e” genotype cannot have a mask, as this document illustrates. Courtesy Marcos Reta. https://www.modernmolosser.com/unraveling-mystery-of…

A couple of years ago, when Marcos Reta of Campione Cane Corsos in Miami bred a litter out of two brindle parents, he was surprised to find that several of the nine puppies were straw colored. Rather than guess about their genetic makeup, he submitted a DNA sample to a genetics laboratory.

The result? The puppies were homozygous for the “e” mutation, which suppresses black pigment in the coat and only allows for the production yellow pigment. In other words, the puppies were not genetically fawn, but rather had the same color genetics as a yellow Labrador Retriever. (In other breeds, such as the Irish Setter, the “e/e” genotype expresses differently, producing a red coat color.)

DNA results on straw-colored Cane Corso. Even though the dog is “sable/fawn” at the A locus, the “yellow/red” mutation at the E locus knocks out and overrides any other coat color that may be genetically present. Dogs of this “e/e” genotype cannot have a mask, as this document illustrates. Courtesy Marcos Reta. 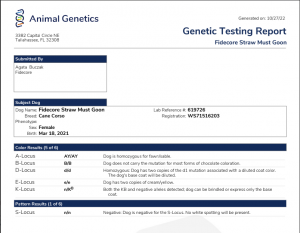 “The Corso is reconstructed from so many other breeds, why not include a dog that has been part of it for hundreds of years?”

Nonetheless, “in my opinion, I think it’s accurate to say straw is a controversial color,” says respected Cane Corso judge Massimo Inzoli of Sicily, who does not consider straw to be a true fawn. “The color existed in the breed, just like the melogna, or badger color, which comes from the Neapolitan Mastiff. Every once in a while, some recessive gene can turn up: I remember the controversy in Brazil over a chocolate-colored Cane Corso that was entered in the champion class!”

This is the place where the search for the cane corso began. It was from the regions of BARI, FOGGIA, MANFREDONIA the whole South of Italy that the first corso dogs were found. They called them DOGO DE PUGLIA.

Nowadays, it is there that we can find the most original STRAW Cane Corso. There live the multi-generational history of the cane corso, not tainted with “modern” varieties in the breed like the “boxer” typo called a hippertype! Many good breeders that carry straw bloodline have pedigrees in their dogs that reach this region!

So if we know that STRAW CANE CORSO aren’t able to produce black mask , do they can have black nose? Lets see the facts about genetic color gens pool.

Homozygous ee causes red or yellow fur. Eumelanin can be in nose, eye lids and paw pads but not in the fur. Eumelanin is, by default, black pigment, but variation in color occurs because genes modify eumelanin to create other colors such as liver (brown), blue (grey), or isabella (pale brown). Genes essentially “dilute” the pigment into these other colors by preventing the production of full strength eumelanin.

So by my understanding NO, THEY ARE NOT ABLE TO HAVE SOLID BLACK NOSE like Dogo Argentino have or other dogs with white fur and no mask. Why this is important? Lots of BYB and puppy farm people are hungry for money. Knowing that STRAW Cane Corso are very rare and unique so the prices are much higher that for regular colors, they ruin the breed and Straw Cane Corso reputation by breeding them with breeds similar to the Corso like White Dogo, Labs, Boxers etc… or sell those breeds as Straw Cane Corso, very important is to do genetic breed tests or know how to read pedigrees. There is only few breeders all over the world that carry this gen in their pedigree and able to breed this out. Anyhow they are able to show long pedigree to proof their dogs come from ITALIAN BLOODLINE and only this is the true proof of the dog pure blood .

In 1983’s first Cane Corso Standard was written! Back then there was no genetic tests or any way to proof what founded and collected Cane Corso dogs genetically was. No one run the tests on any levels. Back then deeply believes that if the dog do not have black nose and is white then is consider as a albino. As we all know albino is genetic fault, so many breeders get rid of this puppies to hide this fact. In time they see that Straw Cane Corso wasn’t albino, they was white/creme in color and still have pigmentations in nose, eye lids and paw pads, so they can not be albino.

Searching the history it was the myth that state that WHITE/STRAW color influence come from The Maremmano-Abruzzese Sheepdog, Italian: Cane da pastore Maremmano-Abruzzese, also called Maremmano, Maremma Sheepdog or Abruzzese Sheepdog, is an Italian breed of livestock guardian dog. The first standard for the breed was drawn up in 1924 by Luigi Groppi and Giuseppe Solaro way earlier than for Cane Corso and for Mastino Neapolitano. So how do we know what the breed comes from? Same where the Straw come from? There is no way to find out this. But the fact is , they was existing at the moment of breed reconstruction and collection. We can only regret this beautiful temperament Corso wasn’t included in the breed standard! We can be happy they are not DQ DISQUALIFY as a breeding stock. By the standard Straw Cane Corso have fault by “lock of the mask” .

We can only hope that one day ENCI will add this beautiful color into standard book.

Many famous and top worldwide breeders do not understand why they aren’t in the standard !